What a difference a day makes

Sunday and Monday were not great days, the former seemed to be a perfect example of when things go wrong, they will crash bang hit the skids go wrong. I stayed home on Monday and avoided interacting with people, but some emails seeped in more bad news from people in my life and I knew I should just hide from the outside world for the day.
Today on the other hand was a pretty good day. I went off to piano class in the morning, had a productive hour or so, then went to have a healthy but stomach busting lunch, and walked home with a bag full of tableas and goodies from a store.
As I put what I thought to be a sweet potato in for a quick boil, I discovered that it wasn't just any tuber, but ube (purple yam), a rich, dark ube that called out home to me. Ube jam! Pulled out the recipes from trusted online sources, thanked the grocery gods that I had all the necessary pantry items, and made a small batch of ube jam for myself. Wow, if there's anything that makes me wish I were home, this definitely is one of the top 5. Nothing like a lucky accident to make me feel like life's not so bad after all.
Posted by Watergirl at 6:49 PM 1 comment:

Day one of the new year/decade, I shall follow a family tradition that was burned into the nuggets of my brain cells: be out of the house, travel, and the year that follows will be full of travel. Or at least spent out of the house. I'll be on the bus for a couple of hours, then on a plane to the frozen north. By evening, I shall be cavorting with friends, and spend two more days in the wintery capital, before heading back for more work and sober reflection.

Tonight, not much happening around these parts. Not a whisper of firecrackers popping, no feasts laid out, no champagne to guzzle. If there was a place to consider the past year, and lay plans for the future, this is it. Zero distractions. Instead, I think I shall make some strawberries with mint and vanilla and watch some Monty Python. Silliness is good for the soul.
Posted by Watergirl at 7:57 PM No comments:

The girl in my life

Gabi is not too far from my mind, but she is at my parent's home. Ebi, no longer the puppy, is also there, domiciled and giving my mom some needed pet love. I wasn't expecting to take on another pet while in China, but the opportunity arose, and I have a new feline in my life, a kitten, calico, and I've named her Loopi. She is probably the first kitten I've raised in over 20 years, so her playfulness, her acquiescence to my moments of overwhelming need to cuddle her, her demanding mews, her high spirited antics, her never ending motor of a purr, her dog like devotion which includes sitting between my feet when I'm on the throne (er, does she not understand the need for privacy in those moments? How would she feel if I bothered her while she was eliminating?), and her tiny warmth on these cold nights, how wonderful it is, how exasperating, how sweet and loving (or is that just me, anthropomorphic as ever?).
She is fearless, lets me rub any part of her body, rarely attempts to squirm away, and enjoys giving me love nips. I feel bad leaving her all alone so much of the time, but she hasn't started acting neurotic. On Christmas, I had four guests over for a long brunch and she ended up playing with everyone. A kitten definitely makes for easy conversation starters.
May she live long, purring her way through a good life.
Posted by Watergirl at 1:02 AM No comments:

Christmas is a week and a half away, it won't be much of a celebration over on this side of the Pacific, but we're going to make the students do a song and a dance and a play at some celebration outside of school, and then I'm going to go home to cook up some champorado for the other Filipino teacher, perhaps invite the other teachers to come along too. I did a bit of online research to make sure I got a decent recipe, and have improvised with the materials I found in several local stores. The amazing find was tableas, straight from the grinding stones of La Resurreccion in Binondo! I've made several cups of tsokolate eh (or ah), and am ready to make some chocolate goodness for a few guests. The one addition I've made is putting a dollop of nutella into each bowl before ladling some of the chocolate rice pudding in, since I've found that makes for an extra layer of chocolate-ness.

Add the rice, the milk and the grated tablea chocolates in a pot over medium-low heat. Stir constantly. It takes about 20 minutes to get the rice tender. Put one tablespoon of Nutella in a cup or bowl, ladle the rice pudding into the bowl and serve with evapoated milk. Add sugar if needed.

Along with the champorado, I plan to serve some fresh strawberries (they're in season now), bread, cheeses, and a selection of jams. A student gave several of us a lot of good tea, but my only resort for coffee might be the instant stuff. Or I'll just make them drink tsokolate eh. A double dose of chocolate never killed anyone I think!
Posted by Watergirl at 9:50 PM 3 comments:

Autumn chill, layering and head gear, it's November.
A student who also teaches me piano invited me up to her place to have chinese dumplings with her family. I watched her mother fill the wrappers ("pi") with the pork and cabbage stuffing, and she tried to give me tips, but all the ones I attempted to fold were hideous. I did much better rolling out the pi after a few tries with the rolling pin; her mother was quite proud of me. We ended up eating and talking for four hours, which was mirrored by a two hour dinner with two other students. This has definitely been a belly busting day.
My student/piano teacher also introduced me to my first Chinese foodie, one of her students who has a keen hand at stove (and can sing Mozart arias!) and a keener interest in finding good eats all over town. I'm so going with him one of these days on a food trip around the city.
It's always a good sign when a fellow foodie suggests living next door to one another so he can cook a meal for you, in return for english lessons. If he finds me an apartment with a large enough kitchen, then I don't mind a wit.
Posted by Watergirl at 11:01 PM 1 comment:

Six days in Wenzhou, two weeks in Quanzhou, two weeks in Fuzhou, and perhaps eventually settling down in Quanzhou if the big boss can make a decision for good. Teachers are shuttling around, some have left, new ones are entering into probationary periods, and I, as the understanding, flexible one, am being asked to hop around the different centers till they can figure out which center needs me more. Which means I also have to make decisions about what to bring, so I don't end up short on underpants.

If there's anything I over pack, it's the undies. Bras, panties, have to have enough. More than enough, I found out I brought pretty much every six pack of Hanes I had bought from Landmark or SM in the last year. About 6 packs of them, which meant, I wouldn't run out of clean whites for over a month. But it's remarkably bulky, undies. As I go through the large bag of undies I had in storage while I was away for two weeks, I realize I've got to cull. Undies are stubbornly unwilling to be tossed though. It's hard enough to find a t-shirt here that looks normal enough to wear, not to mention the right fit, what more cotton whites? What will I do if I can't find them? I pack all the undies away again and cast a glance at some of the clothes that I don't wear often enough.

My wardrobe is as boring as heck these days, and I'd love to toss the whole caboodle into a recycling bin, if not for the fact that they are still serviceable (hideous word) and there's no reason not to wear the blasted things. I give thanks for fall and winter as it lets me pull out my scarves which will add a bit more pizazz. I might give in and start buying some pieces of jewelry to stave off my lack of adornment. Or one of those cute knitted bonnets with crocheted gewgews on them when the silly mood strikes.

I'm looking forward to the changes, but they don't come without some sacrifice. Lack of a proper kitchen for at least 5 weeks, dragging my suitcase all over the place, and the cost of finding new digs after all this hullabaloo is over. Just discovered that hullabaloo only has three l's. Good to know.
Posted by Watergirl at 6:39 PM No comments:

First one I remember seeing on this topic was Alone in the Kitchen with an Eggplant; this year another book on the same theme, What We Eat When We Eat Alone, pursued the idea of what sole diners munch on, and now famed editor Judith Jones has released a book The Pleasures of Cooking for One. The idea of eating solo is nothing new, but for three books in a matter of two years to focus on it, seems to highlight the fact that there are more lone diners out there.
Over the last few weeks, I've encountered more people, men in particular, who pointedly spoke out against eating alone. "I hate eating alone." They're grown men, so perhaps they just feel that dining alone is a social anomaly. One of them seeks company out for lunch no matter who he can corral. Let's just say I've avoided the opportunity to watch him masticate.
I've eaten alone too often in my life, and I don't mind the quiet. I also like to read when eating, sometimes not a good idea if it contradicts the eating and focusing on what I eat. But I prefer the company of a good book over a noisy companion. And many of the meals I've posted in this forum are just that, meals eaten solo. I don't need anymore books to tell me that they are pleasurable in themselves.
Posted by Watergirl at 6:37 PM No comments: 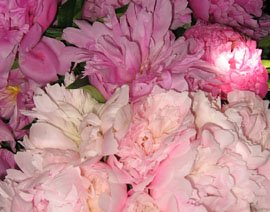